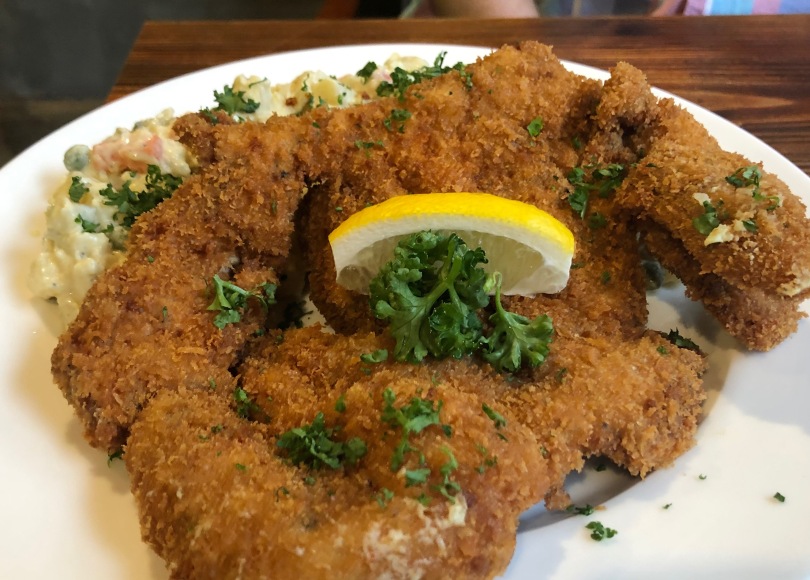 It’s hard to sell “meat-n-potatoes” these days. We all want Sichuan sizzle or the funk of fermentation on our tongues. What was once a phrase to describe basic, good food has become synonymous with boring. But if your diet starts to consist of heavy spice and twang, all of a sudden a pounded, golden-fried piece of pork with a twist of lemon can become exotic, the note that’s not being hit.

As a long-term expat, your memory tends to degrade when it comes to the simple pleasures of a past life. Out of convenience, I mostly eat Korean food for lunch and dinner during the week. JY’s mom keeps us well-stocked with kimchi and banchan and it’s easy enough to whip up a cheonggukjang or hwangtaeguk for a healthy and substantial main dish. These common Korean home-foods have come to populate my every day, what’s right in front of my eyes and thus foremost in the mind. But, when the wind starts to nip as it has lately, forgotten desires well-up from the pool of suppressed seasonal memory.

Praha Pub has been on my radar for a little while. I’d put off going in an exercise of delayed gratification, which is a kind of anti-Instagram action, almost subversive thought in the face of infinitely streaming desire. My conditions were it had to be cold enough, and it had to be on Friday, not to mention also near payday. My mood and physical condition needed to be pitched perfectly for enjoyment. All of this in anticipation of a meaty payload of joy.

The restaurant is tucked in a kind of forgotten nook near Sangsu Station. Folks either head south to the hipster bars closer to the river or north, sucked into the Hongdae vortex. The quietness of the location (see: no thru-cars) makes Praha Pub’s outside seating very appealing. The interior is a mish-mash of industrial gray walls counterbalanced with nut-brown tables, hunter-green upholstery, and traditional Czech tablewear on display. Tables are spaced generously apart, not uncomfortably close as is the wont these days due to the need for profit$.

Gazing at the menu, fried cheese and pickled sausages tempted under the category of “beer food”, but isn’t all of this food “beer food”? Also, the koleno was noted for a future visit, roasted pork knuckle like a German haxen. This night, it was all about the sides, and they dictated what we would order. If it was going to be potato salad, had to get the schnitzel. If I wanted sauerkraut, roast pork was the answer. When we ordered these dishes and two large Pilsener Urquells, the Czech owner smiled and laughed in approval of the pairing, muttering something like “That’s so good”. Such a reaction portended well for the food to come. The large 560ml mugs of Pilsener Urquell arrived next, ceremoniously poured and with an unusually large but pleasant head. When not in Prague and at a Czech restaurant, *especially* then hope to do as a citizen of Prague would do.

The schnitzel arrived first. Not particularly Czech, but the potato salad was, little perfectly textured cubes of spud studded with pickled carrots, green peas in a mustard-mayonaisse melange with a hint of dill. I love a good potato salad, and this one was excellent. The schnitzel and potato salad portion would be large enough for two not-very-hungry people, but we were not not-very-hungry people. The breading was nicely salty and maintained it’s crunch and consistency throughout our sitting. With a simple squeeze of lemon, it danced. It’s amazing how such common food, pounded pork fried with a batter, can find so many different expressions around the world and still always HIT.

Vepřová pečeně, roasted pork with sauerkraut and bread and potato dumplings. I guess pork loin is normally used but as a nod to here, a thick truncheon of pork belly instead, encrusted in rosemary. Most excitingly for me, the pork came on a bed of housemade sauerkraut. My nana, no doubt a still a few generations removed from her German heritage, often had a pot of sauerkraut on the stove. A forgotten need, I enjoyed it thoroughly and although JY’s first time having it, she lapped it up just as well. Circular cutlets of bread and potato dumplings, beloved Czech things, provided the starch component. They reminded me of stuffing and made a nice sponge for the pork and kraut juices.

When asked by the pleasantly bouyant waitress if I would “like another beer”, I said I would very much like one but that I couldn’t possibly drink it. Hunger and memory had both been more than sated.